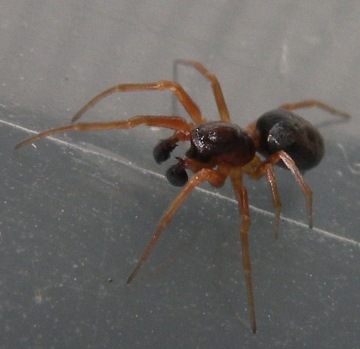 Distribution
The species is widespread in England, but with few records from the south-west, Wales or Scotland. A Palaearctic species that is widely distributed in western and central Europe.

Habitat and ecology
A species that seems to be found higher in the vegetation than D. arundinacea where it makes its mesh web across the surface of the leaves of bushes and trees. It is commonly found in scrub, hedgerows and woodland where the spider can be beaten off bushes and the foliage of trees along the sides of rides and the edges of clearings. It has been found in gardens and has occasionally been noted on prostrate rockery plants spun up in the dead flower heads of the previous year (Crocker & Daws 1996). Adults are found in late spring to mid-summer, with females very occasionally persisting into the autumn.

Status
A common species in much of England.

Adult Season Data (based on 2536 records with adult season information)