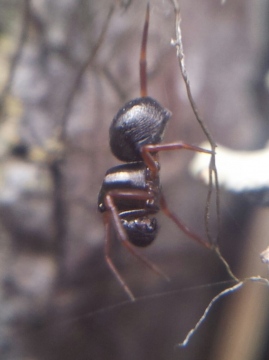 Distribution
D. torva is known only from a few sites in Scotland, including the Black Wood of Rannoch, Rothiemurchus Forest, Abernethy Forest, Bognacruie, Glen Tanar and Ballochbuie. However, the species appears to be well established and frequent at its known sites. It is known from France, Scandinavia and eastern and central Europe.

Habitat and ecology
The species is restricted to Caledonian pine forests. It is found in the deep fissures of the bark on trunks of Pinus sylvestris, where it spins a small web in which it catches wood ants. Both sexes have been found in June and females also in July, August and September.

Status
Occurring in six 10-km squares since 1992, but may be frequent in suitable habitat.

Threats
Loss of Caledonian pine forest and afforestation with high densities of non-native trees poses a threat to this species. The dense canopy of commercial forest produces a cooler habitat which is detrimental to both D. torva and its prey.

Management and conservation
Large areas of Caledonian pine forest have been purchased by conservation bodies and are being managed to restore the open nature of the original habitat.