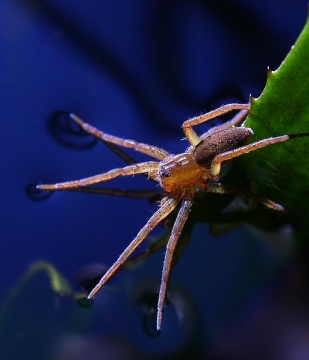 Distribution
Currently this species is only recorded from three locations in Britain: Redgrave & South Lopham Fen (on the Waveney and Little Ouse watershed on the border of East Suffolk and East Norfolk) where it was first discovered in 1956; the Pevensey Levels, East Sussex, discovered in 1988; and the Tennant Canal, Pant-y-Sais and nearby Crymlyn Bog, South Wales where it was found in 2003. It has been the subject of intensive monitoring at Redgrave and Lopham since 1991. At one time this species was numerous in parts of South Lopham Fen but much rarer in the Redgrave portion of this fen. Irrigation of pools occupied by the spiders from a borehole during this period almost certainly prevented extinction of the population, but despite management it is struggling to maintain its numbers here. It was discovered on the Pevensey Levels by Dr Peter Kirby in 1988 where it occurs in drainage dykes between grazing marshes. A large-scale survey of the population at Pevensey Levels in 1991 produced a maximum estimate of 3,000 - 4,000 females, making this the largest population in the UK. It is widespread but extremely local in Europe and has been reported from Finland, Norway, Sweden, Denmark, Poland, Hungary, the former Czechoslovakia, Germany, Switzerland, the Netherlands, France, Italy and Greece.

Habitat and ecology
At South Lopham Fen this species is found among saw-sedge Cladium mariscus, particularly around small pools formed in old peat cuttings. Pools around which fine-leaved grasses such as Molinia have become established are not favoured. It is probable that young spiders hatching in early summer mature the following year while those hatching in late summer spend two winters as juveniles. At South Lopham, adults are found from May to August. In the Pevensey Levels spiders have been found at the water's edge of a drainage ditch under overhanging vegetation. The Welsh site is also a lowland waterbody fed by neutral to alkaline, base-rich water. Tussock Sedge Carex paniculata provides the main structure at this site for nursery webs.

Status
UK Biodiversity Action Plan priority species. IUCN listed. Protected under the Wildlife and Countryside Act 1981. Three populations, one only recently discovered. That in Suffolk where it was first discovered in the UK has been intensively monitored, but numbers have declined to fewer than 100. The population in Sussex may number several thousand. In 2003 a third population was discovered in South Wales.

Threats
All three sites for this spider in the UK are protected. Dolomedes plantarius is protected under schedule 5 of the Wildlife & Countryside Act 1981 which prohibits the unlicensed collection of specimens. The two major threats to the species at South Lopham Fen are declining water quality and, particularly, falling water levels, resulting from abstraction of water, drainage of surrounding farmland and dredging of the River Waveney downstream of the fen. This has resulted in drying up of many of the pools within the fen and replacement of sedge by grasses as well as invasion of willow and birch scrub. Water running off surrounding agricultural fields contains high quantities of nutrients. At the Pevensey Levels, similar problems of falling water tables have resulted from deep drainage for arable agriculture in some areas and from eutrophication in the undrained areas. This species is thought to be in decline throughout Europe, which increases the importance of the English and Welsh populations.

Management and conservation
At the Suffolk site, management has been directed at maintaining water levels in the fen and at maintaining open sedge communities by rotational mowing of small blocks on a four year cycle. The River Waveney has been dammed downstream of the reserve to impede drainage of water from it and artificial deeper pools have been dug in the surface of the fen to provide additional suitable habitat for the spiders. From 1991, water from the adjacent borehole was used to irrigate the surface of parts of the fen in summer in an attempt to maintain water levels. In 1999, the artesian borehole on the edge of the fen used for abstraction of groundwater was closed but, despite increased water levels, to date this appears to have had no effect on the recovery of the population. Intriguing reports of Dolomedes from grazing marsh and other non-acid bog sites need to be followed up to establish whether there are further populations of this species awaiting discovery.

Recorded substrate and hydrology for locations with Dolomedes plantarius