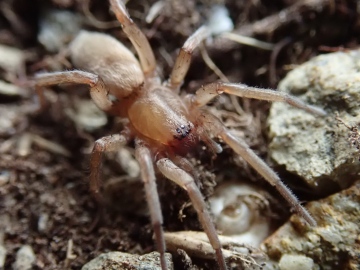 Distribution
The species is widespread in parts of southern England, becoming very scattered and scarce northwards into Scotland. D. pubescens has a Palaearctic distribution and is widespread in western and central Europe as far north as southern Norway and Finland, but it is not recorded from Ireland.

Habitat and ecology
Grassland and heathland. This species is sometimes found when grubbing at the base of long grass, but it also occurs under scattered stones, discarded rubbish and grassy tussocks on heathland. Both sexes have been recorded in summer, males also in November.

Status
Although recorded from 46 hectads since 1992, and showing an apparent decline of 46% in squares with spider records both before and after that date (71 to 38), this species may be under-recorded, so we prefer a Watching Brief.

Threats
Loss of grassland and heathland due to agricultural and urban development and as a result of succession.

Management and conservation
Protect heathland and grassland from destruction for agricultural and urban development. Ensure heathlands are managed to provide some open ground habitats.

Adult Season Data (based on 173 records with adult season information)

Recorded substrate and hydrology for locations with Drassodes pubescens