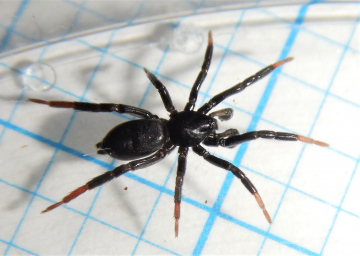 Distribution
The species has a widespread but patchy and scattered Distribution: in Britain, mostly in lowland regions in the southern half of Britain and central eastern Scotland. It is widespread in north-western and central Europe.

Habitat and ecology
D. pusillus is small and more colourful than the typical all black Zelotes. It appears to have a preference for open, dryish areas such as sandy heaths and chalk downland and like other Zelotes species it is often found under stones, discarded rubbish and in grassy tussocks. Adults of both sexes are found mainly from early to mid-summer.

Status
The spider is local and not common.

Adult Season Data (based on 1290 records with adult season information)

Recorded substrate and hydrology for locations with Drassyllus pusillus