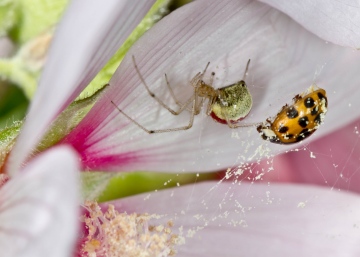 Distribution
E. ovata is widespread throughout the British Isles, and in continental Eurasia westwards of a line drawn from the Russian-Finnish border to the Caspian Sea. It has been introduced into North America, occurring on both the eastern and western seaboards of the northern United States and southern Canada (Oxford & Reillo 1994)

Habitat and ecology
E. ovata is a species typical of open habitats containing low broad-leaved vegetation, e.g. road verges, domestic gardens and woodland glades. It has a strictly annual life history, with males generally mature in June and females in early to mid-July. After mating, males die and females establish themselves in rolled leaves to produce and guard their (usually) single bluish egg-sac. Once the young emerge from the rolled leaf in September, the female wanders off to die, and the young descend to grass-roots level to over-winter. The species is notable for its striking, genetically determined, opisthosomal colour/pattern polymorphism. This consists of three forms; plain yellow (lineata), yellow with two dorso-lateral carmine stripes (redimita), and yellow with a solid shield of carmine on the dorsal opisthosoma (ovata) (Oxford 1983). At least the lineata and redimita forms occur in the vast majority of populations, the ovata form is more sporadic.

Status
An extremely abundant species wherever it occurs.

Adult Season Data (based on 5518 records with adult season information)