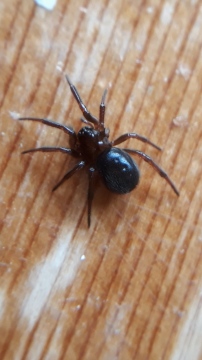 Habitat and ecology
This spider is usually found at ground level under stones and other debris and in leaf litter. It may be encountered in a wide variety of habitats including saltmarsh, sand dunes, heathland and woodland from sea level to mountain tops. Both sexes are mature from early to mid-summer with females occasionally surviving into the autumn. Females, easily mistaken for larger linyphiid spiders, are frequently found guarding their whitish egg-sacs underneath stones.

Status
Locally common but becoming scarce in the north.

Adult Season Data (based on 1102 records with adult season information)