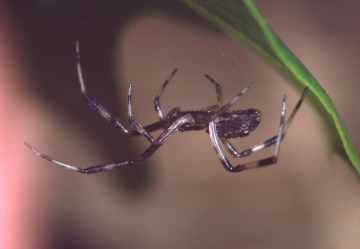 Habitat and ecology
This species produces a very simple, often H-shaped web, usually close to ground level. It is found in a wide variety of habitats from coastal shingle to mature woodland, but especially in marshes and tall grassland in damp situations. The spider sits on its web and uses its legs to tension the silk strands attached to the ground (or other substrate). Crawling insects are caught on this viscid, tensioned silk. Both sexes are mature in early to mid-summer with a peak in May and June, females persisting occasionally until September.

Status
Generally an uncommon species, but it may be numerous in suitable habitat.

Adult Season Data (based on 707 records with adult season information)

Recorded substrate and hydrology for locations with Episinus angulatus