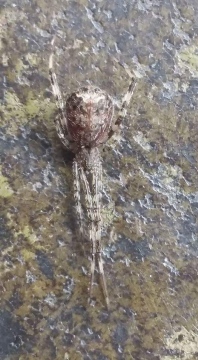 Distribution
Although E. maculipes was first recorded in Britain in 1929 at Tiptree Heath, Essex (Hull 1934), the spider has never been refound at this location. The species was rediscovered in 1981 on the Isle of Wight (Hillyard 1983), and has subsequently been recorded from sites close to the coast between the Isle of Wight and East Cornwall, the Forest of Dean and more recently the New Forest and Dungeness and ever more discoveries in new areas. An old record for Wheatfen Broad, Norfolk has resulted from the identification of old material (Nellist, 2009). It has been recorded from France and central and south-eastern Europe.

Habitat and ecology
Woodland, woodland edge and vegetated cliffs close to the coast. E. maculipes has been found among the low canopy of trees and shrubs at the edges of woodlands where it spins a Y-shaped web between the vegetation at night. It has occasionally been recorded from the field layer at the woodland edge. There are also several reports of this species from amongst dense curtains of ivy on cliff faces and one from plants close to the strandline. Many records are from habitats close to tidal waters. Adults have been recorded between June and September.

Status
Recorded from an increasing number of hectads since 1992, with the number of known sites and records steadily increasing. This species is no longer the rarity it once was: small populations probably occur in most suitable habitats along the south-west coast of the UK, but it may be under-recorded due to low population densities.

Threats
Waterfront development and scrub clearance may pose some threat, but probably not generally at risk.

Management and conservation
Maintain the habitat structure at sites from which this species has been recorded.

Adult Season Data (based on 70 records with adult season information)