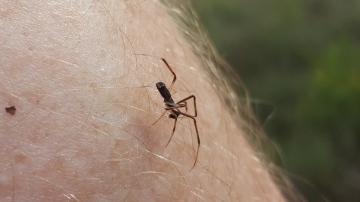 Distribution
The species has been recorded from southern Britain between Cornwall and Kent, and also in Glamorgan and Caernarvonshire in Wales. E. truncatus is widespread in Europe.

Habitat and ecology
This species has been recorded from lowland heathland and maritime grassland. This species spins a simple web beneath the heather. It has also been found beneath mats of rock-rose in Wales on coastal grassland (Alexander and Fowles 1996) and from amongst grass tussocks on the Lizard, Cornwall (Smithers 1998). Adults have been recorded from May to September.

Status
Although recorded from 30 hectads since 1992, this species shows an apparent decline of 40% in hectads with spider records both before and after that date (40 to 24). However, southern heathland is known to be under-recorded for spiders recently.

Threats
The loss of heathlands and maritime grasslands to agriculture or forestry. Erosion of habitat due to public pressure.

Management and conservation
Heathlands should be managed to maintain a mosaic of age classes.

Adult Season Data (based on 134 records with adult season information)

Recorded substrate and hydrology for locations with Episinus truncatus