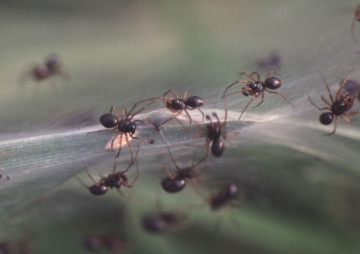 Distribution
The species is widespread throughout most of Britain, possibly becoming more scattered in the north. It is widespread in western and central Europe.

Habitat and ecology
This small ubiquitous linyphiid spider is to be found at ground level on low vegetation and under the bark of fallen trees. When weather conditions are suitable it stands on outstretched legs with the tip of its abdomen pointing in the air. It lets out a line of silk which, if the air currents are favourable, lifts the spider to considerable heights and conveys it to a new location. Such a procedure means that some perish on the journey or land in unsuitable places. This is when many people discover these money spiders on their person or in close proximity. Adults can be found at all times of the year, with peak numbers in summer.

Status
This is one of the commonest spiders, often dispersing aeronautically in large numbers in late summer and autumn.

Adult Season Data (based on 8523 records with adult season information)

Recorded substrate and hydrology for locations with Erigone atra