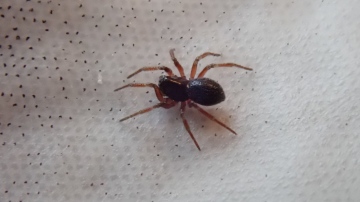 Distribution
Erigonella ignobilis is widespread but very scattered in England and Wales, with a single record from Scotland. A dearth of recent records from East Anglian wetlands may be due to a lack of recent recording as it was found in two sites in Norfolk in 2006 and 2007, but it was not recorded during intensive survey of Broadland fens 2007 to 2009 (Lott et al., 2010). It appears to be absent from much of England including the south-east. A Palaearctic species widespread in north-western and central Europe, including Ireland.

Habitat and ecology
Wetlands. E. ignobilis usually occurs in damp, marshy areas, damp litter and low vegetation at the edge of open water. It is probably adult at all seasons, possibly with a peak in spring.

Status
Recorded from 24 hectads since 1992, but showing an increasingly fragmented and restricted distribution with an apparent decline of 49% of Area of Occupancy (from 37 to 19 hectads) from before that date.

Threats
Drainage of wetland habitats is a potential threat to this species.

Management and conservation
Maintain a high water table in wetlands.

Adult Season Data (based on 270 records with adult season information)