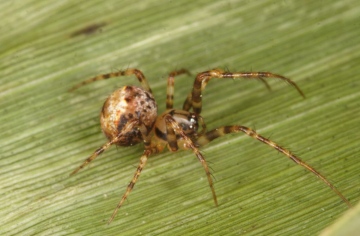 Distribution
The spider is widespread in Britain and Europe.

Habitat and ecology
This pirate spider is found on trees, bushes, low vegetation and in leaf litter in a variety of habitats. It has also been taken in an interstitial trap in coastal shingle. As with other members of the genus, this species is predatory on other, web-spinning spiders. It may be found in company with E. cambridgei. Both sexes are mature throughout the year, with peaks in the autumn and in spring and early summer.

Status
A common species throughout much of Britain.

Adult Season Data (based on 664 records with adult season information)

Recorded substrate and hydrology for locations with Ero furcata