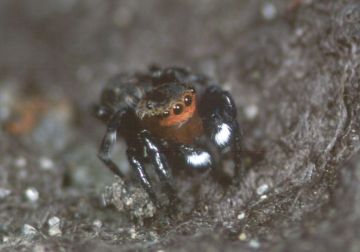 Distribution
Apart from an old record from Cumberland, and recent records from North Yorkshire, Rum and Wigtownshire, the species is confined to the south of England. It is widespread in western and central Europe.

Habitat and ecology
T. petrensis occurs on dry heathland, reaching highest densities between about 7 and 12 years after fire. It may colonise small burnt areas in the first year or two, but may take 4 or 5 years to become established on large burnt areas where there is not an adjacent source of immigrants, suggesting that its powers of dispersal are rather poor. It is usually active in sunshine on bare stony areas, but is also able to live among older heather. The spider is also found under stones on mountains in the north. Males are adult from late April to July with a peak of activity in late May and early June, females are adult from late March to July.

Status
The spider is common on some heathland sites, but rather local. It has been recorded from only eight locations post-1992. Area of occupancy has declined by 68% from 25 hectads before 1992 to just eight hectads after that date.

Threats
The loss of heathland to agriculture, afforestation and development. This species appears to be slow to spread to large expanses of burnt heathland.

Management and conservation
Maintain all seral stages of heather by rotational management of fairly small areas.

Adult Season Data (based on 33 records with adult season information)