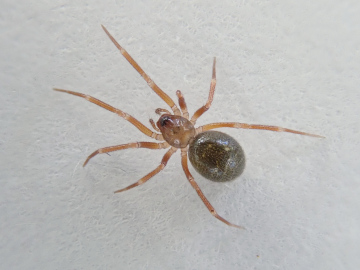 Distribution
An inhabitant of north and west Britain, it is rarely found south and east of the line connecting the Humber and the Exe, though a record from Berkshire in 2003 extended its known range by some 100 km. This species has a wide Palaearctic distribution and is fairly widespread in north-western and central Europe, but has not been recorded from Belgium or the Netherlands.

Habitat and ecology
Open heaths and moorland. This myrmecophilous spider has been recorded from the nests of several ant species (Lasius niger, L. fuliginosus, Formica fusca, F. sanguinea). It occurs exclusively in dry peaty soils. In these habitats it is usually found within ant galleries beneath large rocks or logs. Both sexes are mature throughout the year, with egg-sacs (affixed to rocks within the ant galleries) produced between May and August. Our data show a peak of recorded females in May.

Status
Populations appear to be increasingly fragmented. Recorded from 24 hectads since 1992, but showing a decline of 58% in Area of Occupancy (from 45 to 19 hectads) from before that date, though the species' specialised habitat may have resulted in some under-recording.

Management and conservation
Protect heathland from urban and agricultural development.

Adult Season Data (based on 49 records with adult season information)

Recorded substrate and hydrology for locations with Evansia merens