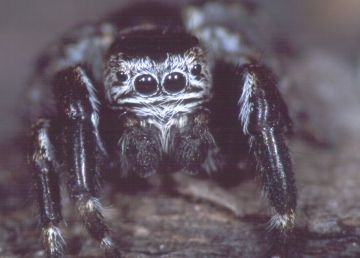 Distribution
The species is largely confined to central southern and south-eastern England, but it has also been recorded in Staffordshire, Shropshire and Cardiganshire, and in 1999 the species was discovered at Hatfield Moors in Yorkshire. It is widespread in north-western and central Europe, but has not been recorded from Ireland.

Habitat and ecology
E. arcuata occurs mainly on old heathland in damp areas, sometimes in bog, often with some scrub present, but sometimes on dry heathland and other similar low shrubby vegetation. Adults of both sexes are found from May to August and males have been recorded in September and October.

Status
Recorded from 36 hectads since 1992, with no evidence of any decline. It may be common where it occurs.

Threats
The loss of heathland to agriculture, afforestation and development. Most of Hatfield Moors have already been destroyed, and peat exploitation continues on vast tracts surrounding the small remaining refuge. Drainage of the surrounding land has lowered the water table to a point where the lowland raised mire is in imminent danger of being completely lost to woodland.

Management and conservation
Maintain some patches of mature, damp heathland with scrub. At Hatfield Moors efforts are being made to raise the water table in the surviving area of mire.

Adult Season Data (based on 226 records with adult season information)

Recorded substrate and hydrology for locations with Evarcha arcuata