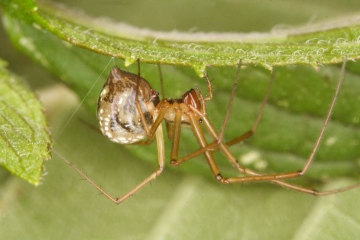 Distribution
The species is widespread in much of England, but apparently scarce in the south-west, absent from central and eastern Wales and very scattered north of Yorkshire as far as Perthshire in Scotland. It is widespread in north-western and central Europe.

Habitat and ecology
F. bucculenta occurs on bushes and low vegetation in damp places in a variety of habitats, including earthy banks, low vegetation in marshy areas, rough unmanaged grassland with scrub and tall herbaceous vegetation, open woodland with bracken and grass and tall heather. It has been observed that when females of this species are disturbed they drop to the ground and remain motionless. During this time the usual lightish colour of the abdomen changes to a much darker hue making the spider more difficult to spot. The former colour and patterning return after a few minutes (Bristowe 1958). Adults may be found in late summer and autumn.

Status
A very local species, generally uncommon and infrequent, although it has been found commonly at sites in Surrey and Sussex.

Adult Season Data (based on 267 records with adult season information)