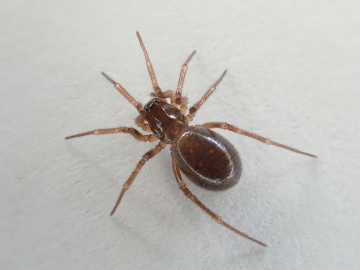 Distribution
Halorates reprobus is widespread throughout coastal Britain and Ireland, but is absent inland. Globally this species is restricted to the north-western coastline of Europe where the centre of its distribution seems to be the British Isles (Decleer & Bosmans 1989).

Habitat and ecology
This spider lives exclusively in coastal habitats such as saltmarshes and rocky/muddy shores. In these habitats it conceals itself beneath rocks and tidal litter. Some specimens may be found below the high tide mark. Halorates reprobus has also been found in the nest material of cormorants (Bristowe 1958). Adults are present throughout the year (Locket & Millidge 1953).

Status
Local in its coastal habitats. Relatively few records exist for this species from continental Europe suggesting that the British populations are of international importance.

Threats
The loss of saltmarsh habitat due to sea level rise associated with global warming is likely to be the principle threat.

Management and conservation
Ensure survival of saltmarshes through managed realignment.

Adult Season Data (based on 191 records with adult season information)