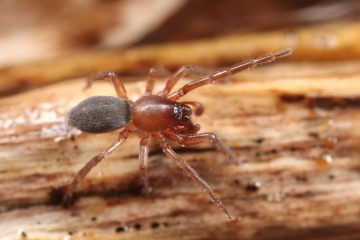 Distribution
The species has been recorded from coastal locations between Suffolk and Dorset, and from Pembrokeshire, Caernarvonshire and Cardiganshire. The European distribution includes Norway, Germany, Switzerland, Austria, the Czech Republic, Hungary, Romania, Poland, the Balkans and Russia

Habitat and ecology
H. minor occurs among tide litter and sparse vegetation and shingle on the seashore. Both sexes have been recorded between April and June, with a peak in June.

Status
The spider may be fairly numerous, but most populations are very localised and the habitat is vulnerable to disturbance.

Threats
Public pressure can disturb the habitat by trampling. In some areas, holiday development and gravel extraction are also threats. On some beaches used for recreation the strandline is regularly removed by machine as it is considered unsightly and a source of pests. This is not known to take place on any beaches supporting this spider, but it could pose a threat to this and other strandline-dwelling invertebrates. Most populations are on the east coast, where sea level rise may threaten its habitat.

Management and conservation
Accumulations of tide-line litter are likely to be of value to this spider and should be left undisturbed.

Adult Season Data (based on 43 records with adult season information)

Recorded substrate and hydrology for locations with Haplodrassus minor