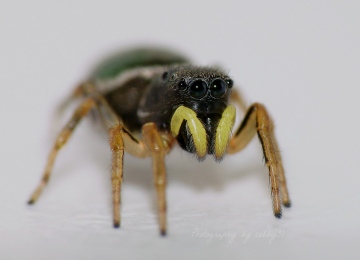 Distribution
The species is widespread in much of the southern half of Britain and central eastern Scotland, but very scattered or absent in upland areas and much of the north.

Habitat and ecology
The habitat of this spider is very similar to that of H. cupreus. It may occur in the field and shrub layer and on lower branches of trees, where it can be collected by sweeping and beating respectively (J. Daws, pers. comm.). Like H. cupreus, in northern Britain the species seems to need sunny conditions (J. Newton, pers. comm.). Additionally, H. flavipes has been found in a Malaise trap, which indicates aerial dispersal (Crocker & Daws 1996). Adults of both sexes are found mainly in May, June and July, females occasionally persisting into September and on one occasion December.

Status
Local. In north-western England it is more common along the coast (J. Newton, pers. comm.).

Adult Season Data (based on 1920 records with adult season information)

Recorded substrate and hydrology for locations with Heliophanus flavipes

jumping spider.cobb
please log on and upload a new image for this species