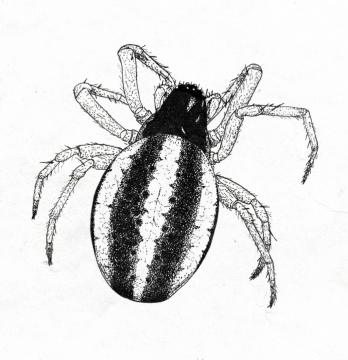 Habitat and ecology
This species spins orb webs on low vegetation, often on calcareous grassland but also in damper areas of heathland, acid grassland, and other tussocky and rough grasslands. Crocker & Daws (1996) also note that occasional specimens may be found on low shrubs. Both sexes are adult in early summer.

Status
Local. Although the most frequently encountered species in the genus this is still an uncommon spider, especially in the north. However it may be frequent in calcareous grassland and some other grassland situations. In Cannock Chase and the West Midlands it has been abundant on heathland, both in the heather and the acid grassland (C. Slawson, pers. comm.).  References

Adult Season Data (based on 617 records with adult season information)

Recorded substrate and hydrology for locations with Hypsosinga pygmaea