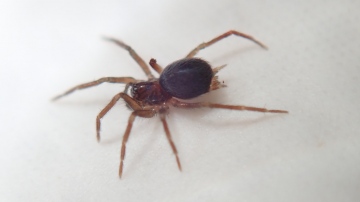 Distribution
The species is widespread but scattered in most of Britain. It is widespread in north-western and central Europe, but included in the Red List for Sweden (Gärdenfors 2000).

Habitat and ecology
The sheet webs of this species are found in leaf litter (including pine needles), moss and detritus in damp situations, especially in woodland. There are occasional records from other habitats including grassland, heathland, fen, sand dunes and coastal shingle. Females are mature throughout the year, but mature males are found only in late summer, autumn and winter, mainly during the autumn.

Adult Season Data (based on 1006 records with adult season information)

Recorded substrate and hydrology for locations with Iberina montana