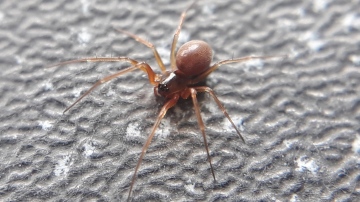 Distribution
The species is widespread but scattered in Britain as far north as central Scotland. It is widespread in north-western and central Europe.

Habitat and ecology
K. dorsalis is a spider of scrub and open woodland, including gardens and churchyards. It is perhaps most frequently beaten off gorse, but also off hawthorn, oak, ash, willow, pine, yew and ornamental shrubs (Crocker & Daws 1996). It may be swept from grass and dog's-mercury in woodland rides, and is occasionally taken from woodland leaf litter. The species seems to have a short season with adults of both sexes recorded from April to July, with most activity in May and June. Sub-adult females may be found in the winter, along with the occasional adult female.

Status
Somewhat local. It is possibly less common now than in the past (Smith 1982).

Adult Season Data (based on 571 records with adult season information)

Recorded substrate and hydrology for locations with Kaestneria dorsalis