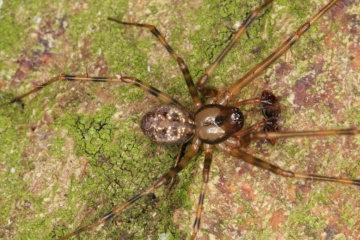 Habitat and ecology
The spider has been recorded from damp, shady places in a variety of habitats, including woodlands, limestone pavement, unmanaged grassland, overhanging banks, gardens, and houses. It is found under loose dead bark, in hollow trees and at the base of trees, in holes, in ivy, under logs and stones, in bird boxes, in cellars and outhouses, in webs across drains and rocks. It ascends to 350 m in the Yorkshire Dales. Adults of both sexes are found mainly between August and October, but females and occasionally males can be found in most months. Immatures are readily identifiable from the three white patches on the underside of the abdomen, so it is a species which can be identified throughout the year.

Adult Season Data (based on 627 records with adult season information)