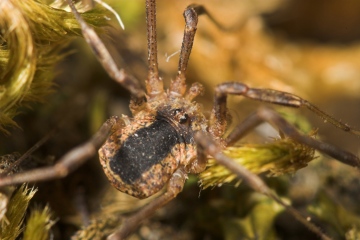 Distribution
Lacinius ephippiatus is widespread across the British Isles. Tt is recorded at similar frequency to Oligolophus tridens with which it is commonly confused. It extends as far north as Orkney and Shetland but has not been recorded in the Outer Hebrides. It was first recorded as a British species by Meade (1855) who considered it 'abundant in various parts of England and Wales'.

It is widespread across Europe with the exception of Spain and Northern Scandinavia.

Adults are present from May to November with the main activity in July/August, a little earlier than O. tridens. It is a species which likes relatively damp habitats, living down in the vegetation and litter of wetlands, grasslands and deciduous woodlands, but climbing higher up in the herb layer when foraging at night. Various authors have recorded L. ephippiatus feeding on springtails, bugs, flies, myriapods, spiders, harvestmen, woodlice, earthworms and snails (Pinto-da-Rocha et al. 2007, p. 311). Freshly killed prey appears to be preferred over carrion and there is no evidence for consumption of vegetable or fungal material.

Identification Note: Sometimes the palpal tubercles are missed, leading to confusion with O. tridens when using the key in Hillyard (2005). Additional character: there is a retrolateral tooth on the male chelicera of L. ephippiatus.

Adult Season Data (based on 516 records with adult season information)