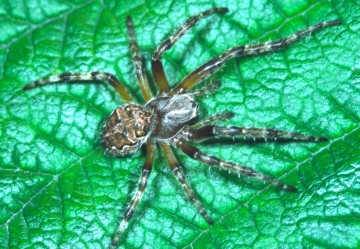 Distribution
The species is widely scattered in Britain and only widespread in south-eastern England north of the Thames. It is widespread in western and central Europe.

Habitat and ecology
This spider spins its orb webs on shrubs and trees, sometimes producing the silken retreat under loose bark. Although it may be found with the other Larinioides species, it is not so closely associated with waterside habitats and is often found in much drier sites. Both sexes are adult in the summer until September.

Threats
None known at present.

Management and conservation
Scrub and hedgerow management should be undertaken on a rotational basis with areas left undisturbed.

Adult Season Data (based on 119 records with adult season information)

Recorded substrate and hydrology for locations with Larinioides patagiatus