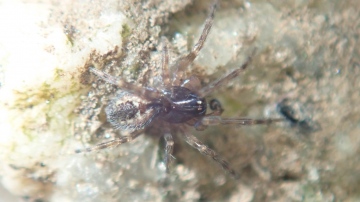 Distribution
The species is widely distributed in the southern half of Britain, but with very few records from Scotland or the west. A Palaearctic species widespread in western and central Europe but not recorded from Ireland, Norway and Finland.

Habitat and ecology
The spider occurs on bushes and trees in woodland and scrub, and can be beaten off oak, holly, yew, pines, gorse, etc. It may also be fairly common on ornamental evergreens and privet hedges in parks and gardens (J. Daws, pers. comm.). Juveniles over-winter in leaf litter, brushwood, under bark and other similar situations. Adults occur mainly in May and June, with females persisting into July or even September.

Status
Local, and commoner in the south.

Adult Season Data (based on 1062 records with adult season information)

Recorded substrate and hydrology for locations with Lathys humilis