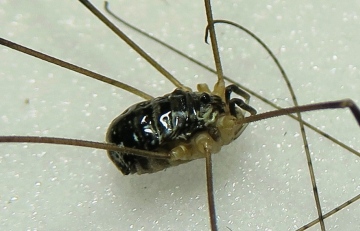 Distribution
This species, under the name of Leiobunum tisciae was first recorded in Derbyshire in 1975, but not at the time added to the British list (Hillyard & Sankey 1989). The validity of that record has since been confirmed (Axel Schönhofer, per. comm.). The Leiobunum rupestre species group has recently been reviewed (Martens & Schönhofer 2016) and the name L. gracile identified as the oldest available synonym of L. tisciae.

It is not known whether the species has established itself in Derbyshire, but in 2008 a new population was found in Aberdeenshire with subsequent records turning up across north and north-east Scotland (Davidson 2009). So far there are no confirmed records for England or Wales, where another recent introduction, L. sp.A, has turned up. It is likely that there have been several recent introductions of this species to Britain, perhaps via the European horticulture trade.

Habitat and ecology
This species naturally occurs in lowland, montane and riverine forests. It is often found on tree trunks, in tree hollows (between stems perhaps, rather than hollow trees) and on rock faces. Its secondary habitats, when introduced to new areas, are more synanthropic. Although data are limited, the British habitats occupied are predominately parks and gardens (including cemeteries), buildings and grassland. Within these broad habitats this species is often found on building and other walls, and also under logs/stones etc. The first Aberdeenshire record was in a semi-rural cemetery near Huntly where a specimen was found in a cavity formed behind a gravestone leaning against a wall. It is possible that deeper cavities allowed over-wintering for this remarkably early (April) mature female. The species may have been introduced to this unusual location with imported plants; the horticulture trade is probably the main source of other introductions too. Adult females have been recorded as early as April (in Scotland), perhaps having persisted through the winter. The main adult period in Britain appears to be July to November, peaking in September. Avram (1968) suggests the eggs hatch in April with adults appearing in July. So far specimens have been found at altitudes up to 230m in Britain. Its feeding habits are probably similar to other Leiobunum species, i.e. a fairly broad range of invertebrates, but this need investigation. There is likely to be competition between the various recently introduced, long-legged harvestmen now occupying urban Britain, and also with native/naturalised species. There is a great opportunity to study the spread of L. gracile, and its ecology and phenology.

Davidson, M. B. 2009. The arachnids of Dunbennan Cemetery, Aberdeenshire. Part 2: A leiobunid harvestman new to Scotland and the British Isles? SRS News 63: 11 In: Newsletter of the British Arachnological Society 114.

Adult Season Data (based on 29 records with adult season information)

Recorded substrate and hydrology for locations with Leiobunum gracile