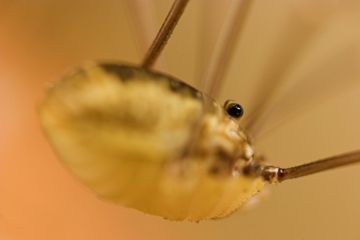 Distribution
This is a widespread and common species. When first recorded by Meade (1855) he described it as 'very abundant'. Hillyard (2005) notes that it is particularly common in the south, however there is some indication that since the early 1990s there has been some retraction in range in the far south-east. It extends north to Orkney.

Care is required with discriminating between Leiobunum blackwalli and L. rotundum (the key character of a pale or dark ring around the eyes can be confusing). Identification is made even more difficult with the recent introductions of other Leiobunum species: L. gracile and the as yet unnamed L. sp.A.

Habitat and ecology
Leiobunum rotundum makes use of a wide range of habitats especially those with good structure, such as woods, hedgerows, rocky areas, heaths and gardens. It can sometimes be found in small aggregations on both natural and man-made surfaces, such tree trunks, rocks, walls and under bridges. The species generally favours shady, moist environments and is less common in open grassland and dune habitats. It has been recorded at up to 414m in Britain but at 2000m in the Alps (Martens 1978).

The adults are most commonly found from July (peaking in August) through to November or early December, but there are records from as early as May/June. The eggs hatch around April and the juveniles are found in the ground layer.

This is a long-legged species that is able to move easily through its habitat both vertically and horizontally. It exploits a very wide range of invertebrate prey including, bugs, beetle larvae, moths and myriapods, as well as spiders and other harvestmen. It also makes use of vertebrate carrion.

This is another species which may find itself in conflict with some of the introduced species of harvestmen, e.g. L. gracile and Opilio canestrinii, and their interactions would be worthy of investigation. Also the apparent decline in south-east England (potentially a climatic effect) should prompt some resurveys of old sites.

Adult Season Data (based on 827 records with adult season information)

Recorded substrate and hydrology for locations with Leiobunum rotundum