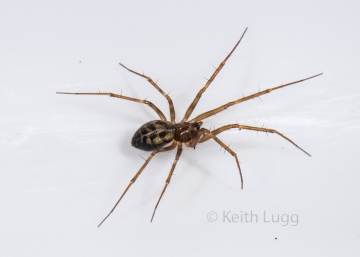 Distribution
The species is widely distributed in much of Britain, becoming very scattered in the north. It is widespread in western and central Europe.

Habitat and ecology
L. leprosus is found in all types of buildings, from newly built houses (noticed within nine months of completion) to derelict barns. It forms small webs across corners of rooms, behind cupboards, etc. mostly at fairly low levels. It also occurs in disused quarries, in bark of old trees in parkland and broad-leaved woodland, under man-hole covers, in rubbish and in garden litter (Crocker & Daws 1996). On Scilly it has been found away from houses in vegetation on a dry stone wall, in association with Harpactea (I. Dawson, pers. comm.). It would be interesting to know whether it is confined to houses in any parts of its range. Adults of both sexes have been recorded throughout the year, possibly with peaks in the autumn and spring.

Status
Common, and probably very under-recorded because its main habitat is inside houses.

Adult Season Data (based on 420 records with adult season information)

L. leprosus - female
please log on and upload a new image for this species