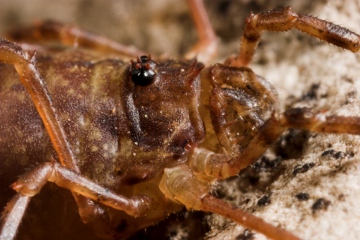 Distribution
Lophopilio palpinalis is widespread in Britain but may be under-recorded because of its secretive habits and small size. It was first recorded as a British species by Meade (1855) from a specimen collected in north Wales. It extends to the Hebrides (all pre-1980 records) and the north coast of Scotland, but not Orkney or Shetland.

It occurs across Europe: France, the Netherlands, Belgium, Germany, Denmark, southern Sweden, Latvia to the east of the Crimea, and south into Bulgaria, Montenegro, Bosnia-Herzegovina.

Habitat and ecology
Lophopilio palpinalis is a small, ground-layer species of damp woodland, wetlands, hedgerows and gardens but it can also occur in more open habitats such as grassland and heathland. In the Netherlands it occurs in dunes, presumably finding a sufficiently moist microclimate there. It is usually found in litter, moss, rank grass etc. It has been collected at altitudes up to 460m in Britain and up to 1700m in the Alps (Martens 1978).

This is a quite late-maturing species, becoming adult from July, peaking in November and persisting through to January. The juveniles are found from around May until October and the eggs are laid in late summer/autumn but do not hatch until spring.

The most notable feature of this species is the structure of the palps; with their relatively huge downward pointing tubercles and inward facing outgrowths, together with a forward-pointing trident, they form a formidable cage around the mouthparts. This is perhaps similar in function to the mandibles of the ground-beetle Leistus. This structure undoubtedly assists in prey capture and indeed their recorded invertebrate food includes hard-to-catch springtails as well as homopteran bugs, barkflies, diptera, myriapods, spiders, earthworms and gastropods. It has also been reported feeding on mushroom juices.

These charismatic animals are ideal for studying adaptations for prey capture.

Adult Season Data (based on 303 records with adult season information)