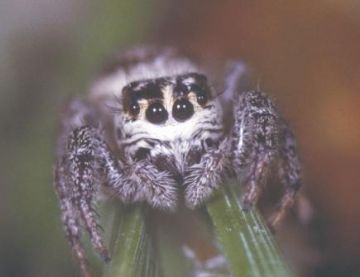 Distribution
The species has been recorded at several sites in south-eastern England. It is widespread in the Mediterranean, becoming uncommon in the north.

Habitat and ecology
The spider was found on pines at Mile End Park and Brooklands. In Essex it was found on gorse growing on brownfield land near the Thames and on wild privet and hawthorn scrub growing on a south facing bank. It is probably colonising suitable habitat in areas with a sufficiently warm climate.

Status
This jumping spider was first recorded in Britain in 2002 at Mile End Park in East London (Middlesex) and subsequently found at Brooklands, Surrey and two sites near the Thames in South Essex and subsequently more widely. In Europe the species occurs mainly in southern and central Europe, but occurs as far north as Belgium. Although it was originally thought most likely that the spider had been imported with pines into the Mile End Park site, it now seems more likely that the spider has naturally colonised Britain from Europe and is in the process of spreading.

Threats
In view of the spider's successful establishment and spread, it cannot be regarded as threatened.

Management and conservation
Management to retain scrub and pine in open south facing conditions would be likely to favour this species.

Adult Season Data (based on 69 records with adult season information)