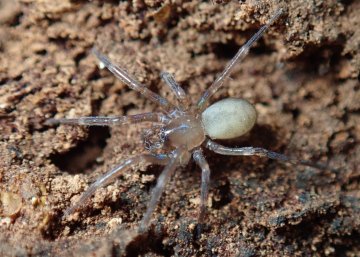 Distribution
There are old records for this spider dating from early in the 20th century from Oxshott and Weybridge in Surrey; from Wellington College, Berkshire; Porlock, South Somerset and Craig-yr-Eglwys, Glamorgan. From the 1970s further records have been obtained from six sites in Charnwood Forest and from Donington Park, Leicestershire and from Sherwood Forest, Nottinghamshire. The spider is widely distributed throughout Europe (Roberts 1995).

Habitat and ecology
The spider has a strong association with ants, often in areas of over-mature trees and dead wood. It has been found in the nests of Lasius fuliginosus (Latreille), L. umbratus (Nylander), L. brunneus (Latreille) and Formica rufa L. Occasionally, M. macrophthalma has been found away from ants, under the bark and within the hollow trunks of dead and ancient trees. As these are generally records of single specimens, breeding colonies are thought to be restricted to ants' nests and their environs. Adults of both sexes have been recorded from April through to December, suggesting the probability of year round maturity.

Status
The spider is recorded from two hectads since 1992 and it still appears to be well established in Charnwood and Sherwood Forests. Area of occupancy has declined from nine hectads before 1992 to just two since that date. However, there is little recent information on the spider's occurrence on its earlier known sites in southern England, possibly due to the lack of sufficient recent investigation of these sites for the spider. According to Wunderlich (1986) British specimens described as M. macrophthalma are large-eyed specimens of M. arietina, but this needs confirmation (see Merrett & Murphy, 2000).

Threats
The 'tidying up' of fallen limbs and branches from ancient trees poses a threat to those invertebrates associated with this habitat. In addition, the pressure resulting from increased recreational use of sites such as Charnwood and Sherwood Forests may lead to conservation problems in the future. There may be increased demand for space and more stringent health and safety requirements call for dangerous trees, which may be liable to shed branches, to be made safe or removed altogether. In Charnwood Forest, quarrying and bracken burning threaten habitats where the spider has been recorded.

Management and conservation
In Sherwood Forest Country Park the conservation value of ancient trees and dead wood habitat is recognised and incorporated into the management plan. At Donington Park, new plantings of oak and lime are designed to maintain the existence of a multi-aged woodland in coming centuries (to include the continuing presence of over-mature trees).

Adult Season Data (based on 7 records with adult season information)