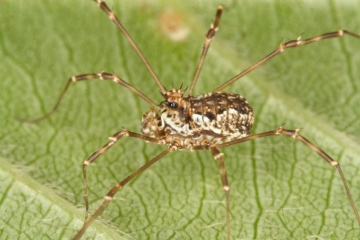 Distribution
This is a widespread species extending from the south of England to Shetland and the Western Isles. Despite being a very distinctive species, it is likely that it is under-recorded as a result of its cryptic colouration and secretive habits. There is some evidence of a decline in the far south-east with many old sites seemingly no longer occupied. This may be a recording artefact, but could be a consequence of climate change with the area now too dry and warm.

Megabunus diadema was first recorded in Britain by Meade (1855) as occurring in England and Wales. In Europe it is considered rare and reported from the Pyrenees in northern Spain, the coast of Normandy, the Faeroes, Iceland and coastal Norway.

Habitat and ecology
This species is most common in the cooler, wetter upland of Britain (see above) and is usually associated with the ground layers of heathland and woodland. Often collected from litter and from under rocks and logs, it is also found on tree trunks, especially in damper conditions. It is found at altitudes up to about 650m in Britain and to 2000m in the Pyrenees (Martens 1978).

The relatively few British records with adult/sex data show females present from March and peaking in June. Males have been recorded in May. Hillyard (2005) suggests that adults are present in most months of the year; some may live beyond 24 months. Females are much more abundant than males and there is evidence that many/most populations are parthenogenetic (i.e. females are able to produce viable eggs without males). Philipson (1959) recorded juveniles in all months. Eggs are laid in late summer and hatch in the same year.

There is a great opportunity to explore the life history and ecology of this very distinctive species. Southern opilionologists may want to investigate the impact of climate change.

Bristowe, W. S. 1949. The distribution of harvestmen (Phalangida) in Great Britain and Ireland, with notes on their names, enemies and food. Journal of Animal Ecology 18: 100-114.

Recorded substrate and hydrology for locations with Megabunus diadema