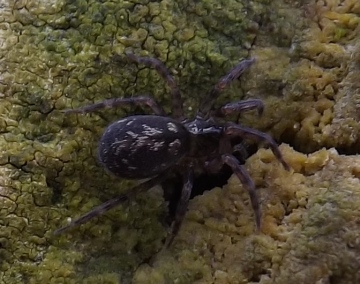 Distribution
The species was discovered on the Isle of Sheppey at Minster in Kent in 1999 (Harvey, 2001). Further material was collected in similar habitats in September and October 2002 at Seasalter and Whitstable on the N. Kent coast it was again found in large numbers at Whitstable in October 2004. In February and August 2005, three females were found in rotting logs in a garden and a hedgerow at Doddington, Kent. A male and two females were taken in marram on dunes at Camber Sands in October 2005. Another male was found in in rough vegetation on shingle at Deal in Kent in June 2007. Both sexes were found in reasonable numbers on a brownfield site at Canada Water, Rotherhithe in September 2008, and it continues to be found in new locations as far west as Cornwall and north.

Habitat and ecology
The spider was originally found in tall open herbage growing on stabilized shingle at the foot of London Clay under-cliffs, and dense tall grass close to the beach. More recently it has been found in gardens, indoors in houses, in marram grass on sand dunes and under stones on post industrial land. Adults have mostly been found in the autumn, with a peak in October.

Status
One male and two females were found in 1999 at Minster in N. Kent. Subsequently it has been collected at a range of sites in East Kent, with an increasing range in the Thames corridor, south-eastern England and now much further west and north. Although it is closely related to M. collinus (L. Koch, 1872), it appears to be sufficiently different to be treated as a good species in its own right (P. Merrett, pers. comm).

Threats
Given the wide range of habitat types the spider has now been found in, it is unlikely that there are any immediate threats to it.

Recorded substrate and hydrology for locations with Megalepthyphantes collinus occidentalis