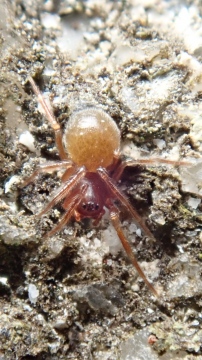 Distribution
M. apertus is widespread in Scotland and parts of England, but very scattered or absent elsewhere. It is a Palaearctic species recorded from Scandinavia, Belgium, Germany, Austria, the Czech Republic, Poland and Romania.

Habitat and ecology
The spider is usually found in moss, leaf litter and detritus in woods. Any differences in habitat requirements between M. apertus and M. herbigradus are not yet clear, but M. herbigradus seems to occur in more open habitats than M. apertus in the north (P. Merrett, pers. comm.). Adults have been recorded at all seasons of the year with a peak in spring and early summer.

Status
The species is apparently more local and scarce than M. herbigradus in the south, but commoner than that species in the north. M. apertus was reinstated as a species separate from M. herbigradus by Millidge (1975). In both sexes, careful consideration of the genitalia is necessary to distinguish between these two species.

Adult Season Data (based on 717 records with adult season information)

Recorded substrate and hydrology for locations with Micrargus apertus