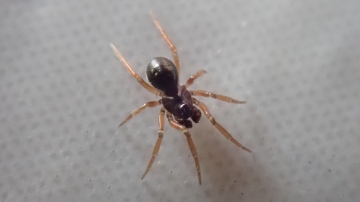 Distribution
The species is widespread in central eastern Scotland, but scattered elsewhere in Britain. It appears to be absent from some well-recorded southern areas such as Essex. Smith (1982) suggests it is restricted to higher ground in Yorkshire. A Palaearctic species, it is widespread in north-western and central Europe.

Habitat and ecology
Regarded by Merrett (1977) as mainly a species of both broad-leaved and coniferous woodland, but it may also be found in moss and grass in more open areas. Adults may be found throughout most of the year. Our limited phenology data suggest a peak in early summer.

Status
Local. The spider is probably much commoner in the north but is rare or absent from many parts of England.

Adult Season Data (based on 1289 records with adult season information)

Recorded substrate and hydrology for locations with Minyriolus pusillus