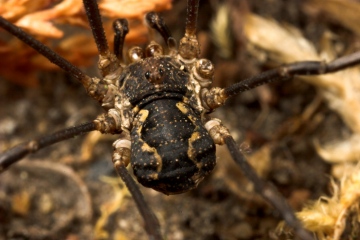 Distribution
Mitopus morio is often considered the universal harvestman that most people will have seen in the countryside and is one of the most commonly recorded species. It can be seen from the distribution maps for the British Isles that this species has been found in virtually every hectad that has been surveyed for harvestmen. There can be little doubt that blank areas lack recording effort. It seems very likely that M. morio, a species which occupies a 3D vegetation structure, is more abundant than N. bimaculatum, a 2D ground-layer species.

Originally described from Norway, the first British record was by Meade (1855). Mitopus morio was probably one of the first non-flying invertebrates to invade post-glacial Britain. Hillyard (2005) states that it occurs over much of the Nearctic and Palearctic, from North Africa to Spitzbergen.

Habitat and ecology
Mitopus morio is present in all habitats from coast to mountain top and is ecologically very adaptable. It is highly variable in its morphology, colouration and physiology and has been at times divided into new species, sub-species and varieties. This adaptability perhaps gives some clue as to why harvestmen have been so successful, with very little design change over at least 400 million years.

Martens (1978) gives a range up to the snowline at 3000m in the Alps and Pyrenees. In the UK it is found to the summits of the Scottish peaks at around 1000m. It occurs in coastal dunes, grasslands, heaths, woodlands and urban areas - indeed it is hard to think of a habitat where it is not found. In scrub and woodland it takes advantage of all levels of the vegetation.

Hillyard (2005) states that the eggs hatch in April/May and juveniles persist until the end of August. British records indicate that adults are present from May to November with peak numbers between August and October.

The list of food items recorded by numerous authors for this common species is unsurprisingly large. Depending on life-stage it includes springtails, flies, bugs, aphids, lacewings, earwigs, ants, spiders, other harvestmen, myriapods, woodlice, earthworms and snails. The diet also includes dead invertebrates but not plant matter.

Taxonomic Note: It is currently considered that M. morio is one very variable species and that previously erected species (Jennings 1982) and sub-species are merely varieties (Martens 1988). Status Very common and widespread.

Adult Season Data (based on 1538 records with adult season information)

Recorded substrate and hydrology for locations with Mitopus morio