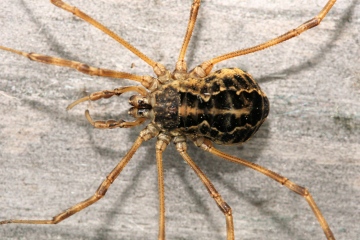 Distribution
This was originally described as a separate species, Mitopus ericaeus (Jennings, 1982), but is now generally considered a variety of the very variable species Mitopus morio. It was first described from specimens collected at Muggleswick Common, in County Durham, and was thought to be an upland species. It has since been recorded in the Scottish Highlands, Northern England and North Wales. However it is probably much more widespread as most recorders simply lump it as M. morio. More recent locations include South Uist in the Hebrides, and West Cornwall, extending the altitudinal range. It has also been recorded in the Pyrenees by Martens (1988) who discussed its likely status.

Habitat and ecology
This variety was considered to be restricted to moorland habitats above 250m (see Hillyard, 2005; Jennings, 1982), with heather, bracken, bilberry, cottongrass etc. Based on HRS records, the altitudinal range of this variety would appear to be much greater, including, for example, coastal heaths. It is common in the ground and field layers and easily caught by pitfall trapping, sweep-netting etc. Jennings (1982) found that var. ericaeus was always in a later instar than var. morio. Presumably as an upland invertebrate it would mature and lay eggs earlier because of the short season. The peak for var. ericaeus is earlier and more condensed in July-August, compared with August-October for var. morio. Hillyard considered that its life-cycle may extend beyond one year, perhaps allowing it to exploit this harsher environment.

Status
Common in upland areas and heathland. The existence of intermediate forms, both in morphology and colour pattern, make this variety difficult to identify with confidence, even with examination of male genitalia. Most records (other than Jennings) are probably based on the dorsal pattern without confirmation by morphological measurements.