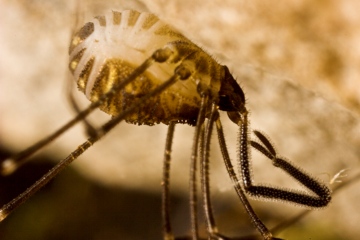 Distribution
Bradford, in west Yorkshire, was the first recorded British location for this species (Meade 1855). It is almost as widespread as Nemastoma bimaculatum, extending to Shetland, Fair Isle and the Western Isles (but not to Orkney or Lewis), but is much less frequently found and probably under-recorded because of its sombre colour, retiring habits and reluctance to move.

Mitostoma chrysomelas is present across much of Europe including Ireland, France, Italy, Poland, the Balkans, Romania, Bulgaria and Scandinavia.

Habitat and ecology
This is probably the most troglodytic of the British harvestmen, frequently occurring in subterranean cavities but also more generally below stones and logs and in moss, vegetation and litter. It is recorded from the coast to mountain tops, to at least 700m in Britain and 2000m in the Tatra Mountains. It has most frequently been recorded in woodland and grassland, but also occurs in wetland habitats. Its modest chelicerae limit the size of invertebrate prey it can tackle, and the presence of sticky, capitate setae on its palps suggests it may specialise in springtails and other hard-to-catch small invertebrates.

Adults and juveniles are present throughout the year. They are eurychronous i.e. egg laying is not restricted to one period of the year and generations will therefore overlap. Data on lifespan appears to be lacking but this species is not considered to be long-lived.

Adult Season Data (based on 110 records with adult season information)