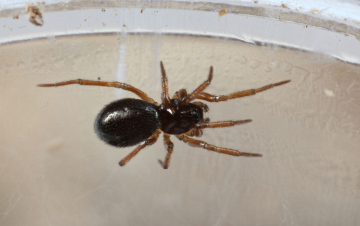 Habitat and ecology
The spider is nearly always found in crevices in the bark of trees, particularly conifers, amongst lichen on tree trunks and sometimes in birds' nests. In early summer it may sometimes be found running over the surface of the bark in numbers. Adults are found in spring and summer mostly in May and June, but occasional individuals have been recorded in the autumn.

Status
This is a widespread but local species. The spider is probably active for short periods and its cryptic tree trunk habitat is likely to be under-recorded.

Threats
Threats include the loss of old trees in sunny situations.

Management and conservation
Old trees in sunny situations should be retained and seral succession prevented from shading existing trunks.