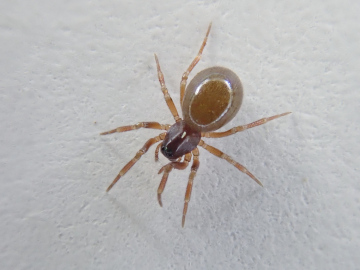 Distribution
The species is widespread but scattered throughout most of western and northern Britain as well as England south of the Thames. It seems to be largely absent from the Midlands and eastern England between Yorkshire and Kent including some well worked areas. This spider is restricted to northern Europe (Platnick 1998).

Habitat and ecology
M. castaneipes inhabits two different habitats in Britain. In the south it has been found abundantly amongst moss growing on the trunks and lower branches of standing trees (Merrett 1979). In the north in addition to moss on tree trunks and rocks, it associates with open uplands and mountains, where it lives beneath rocks. Adult females have been recorded in most months of the year. Adult males have been found in the autumn and again peaking from January and February until April.

Status
UK Biodiversity Action Plan priority species. Local. It was added to the UKBAP in the 2007 review because of evidence suggesting a substantial long term decline. Its habitat in moss on trees needs to be specially searched.

Threats
Evidence suggests a substantial long term decline, but the causes of this are currently unknown.

Management and conservation
Management should aim to provide a continuity of the existing habitat mosaic.

Adult Season Data (based on 346 records with adult season information)