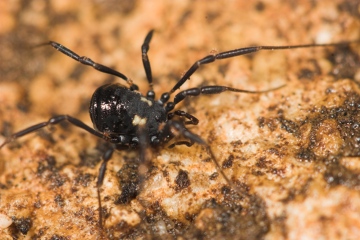 Distribution
This is the most commonly recorded British harvestman. It is a very widespread species throughout Britain, extending to most parts of the northern and western island groups. The large areas with sparse records in western Scotland, the Scottish/English border regions and mid-Wales are almost certainly under-recorded. Martens (1978) gives its European distribution as extending from Iberia through France, Belgium and western Norway. Nemastoma bimaculatum was previously confused with N. lugubre (Gruber & Martens 1968); it would be surprising if at some time in the future N. lugubre did not turn up in Britain through accidental introductions. In the Netherlands N. lugubre and N. bimaculatum are often found together (Wijnhoven 2009).

Habitat and ecology
Nemastoma bimaculatum is found from coast to mountain top (up to at least 960m in Britain) occupying microhabitats in the soil layer, below rocks, logs and other debris, and within moss and leaf-litter. It is found in both wooded and open habitats. Adults are found throughout the year and Philipson (1959) considered they live up to 18 months. They are eurychronous i.e. egg laying is not restricted to one period of the year, and generations will overlap. The juveniles are most frequent in summer and autumn. They are active on the surface at night and often caught in pitfall traps.

The palps of all stages have capitate setae i.e. hairs that are glandular and have a sticky blob on the end. These presumably act like fly paper and probably allow these harvestmen to specialise on springtails and other small, soft-bodied invertebrates suited to their small chelicerae. N. bimaculatum is not known to feed on plant material, fungi or carrion but will eat freshly dead invertebrates.

Adult Season Data (based on 1938 records with adult season information)