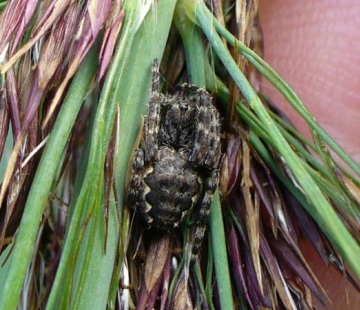 Habitat and ecology
The spider conceals itself under bark and in fissures in posts and fences during the daytime. In some areas it is a common resident of window and door frames. The body is flattened and this assists the spider to secrete itself in the cracks and fissures. This spider is nocturnal and builds a conspicuous orb web between its retreat and surrounding vegetation. Whilst the web is usually empty during the day, the spider can be found hidden away nearby. Adults of both sexes are found mainly between late spring and autumn, but females and occasionally males can be found during the winter.

Adult Season Data (based on 913 records with adult season information)