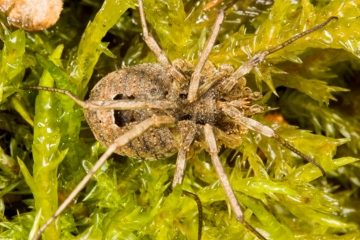 Distribution
Although listed by Meade (1855), the first authenticated British record of Odiellus spinosus appears to be by Pickard-Cambridge (1890) from Corfe Castle in Dorset. The species is common and widespread in the south and east of England but is gradually expanding its range north, and has now reached Wales, Lancashire, Yorkshire, Cumbria and, in 2017, Orkney. Owen (1991) shows that of 10 species of harvestmen recorded in an English garden over a 10 year period in the 1980s, O. spinosus was consistently by far the most abundant species.

Habitat and ecology
Odiellus spinosus has been found up to 135m altitude in Britain and Hillyard (2005) notes that it generally avoids high ground. This is a ground-living species which ascends vegetation and walls. It can be abundant in parks, gardens, brown-field sites and around buildings and on walls and may form small aggregations. Wijnhoven (2009) notes its preference for hot, dry sites, suggesting that its natural habitat may be open heath and dune.

Hillyard (2005) reports that the eggs hatch in June and that individuals mature around August, surviving until the end of the year. British data shows adult records from June to November.

Surprisingly, information on the food of O. spinosus is sparse. Sankey (1949) notes spiders and a mite being eaten but also records that the harvestmen themselves are eaten by hedgehogs!

Adult Season Data (based on 72 records with adult season information)

Recorded substrate and hydrology for locations with Odiellus spinosus