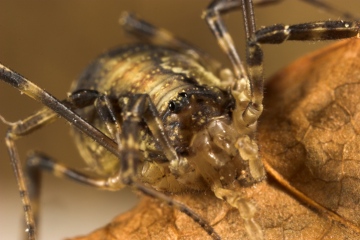 Distribution
Oligolophus hanseni is common across mainland Britain but with Skye the only island location (probably because of arboreal habits). There is something of a bias towards the north with few recent records in the far south-east. The first British record was in 1896 from the Edinburgh area collected by W. Evans (O.Pickard-Cambridge 1897). The European distribution includes northern Spain, France, Ireland, the Benelux countries, the German lowlands and from southern Scandinavia to western Poland; sporadically in Switzerland (Wijnhoven, 2009).

This species is very similar to Oligolophus tridens but has two additional trident members, one either side of the central three, often with additional tubercles behind these. These vary in colour but are often paler than the body colour and tipped with black spines. The saddle of Oligolophus hanseni is often inconspicuous but outlined in white dots or patches.

Habitat and ecology
Oligolophus hanseni occurs at altitude up to 330m in Britain and 1900m in the Cantabrian Mountains (Hillyard 2005). This is predominantly a species of woodland or wooded habitats (including gardens) and is most commonly collected as adults by beating deciduous and coniferous trees and bushes. After windy weather the adults are often found in lower strata and the juveniles are usually found in the ground and field layers. As with other upwardly mobile harvestmen they are often found on the walls of buildings.

There appears to be very little published information on their feeding habits.

The adults have been recorded from August to December with the odd specimen persisting into the early months of the following year. The eggs (presumably laid at ground level) hatch in May/June and juveniles persist until September, moving to higher strata as they mature.

Adult Season Data (based on 116 records with adult season information)