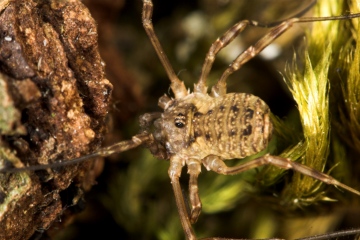 Distribution
This is a very common species although probably not so well known to the general naturalist because of its sombre colours and secretive habits. It was first recorded in Britain from a number of locations including Bloxworth in Dorset (O. Pickard-Cambridge 1890). Its range extends throughout Britain, from Shetland to Cornwall, and is to be found on most of the island groups. Its European distribution includes France, the Benelux countries, Great Britain and Ireland, Sweden, Norway, Iceland, Finland, Germany, Switzerland, Austria, Poland, the Baltic States, Russia, the former Yugoslavia, Italy, Czech Republic, Slovakia and Romania (Wijnhoven 2009).

Identification
Oligolophus tridens is a plain brown harvestman characterised by a rectangular saddle and a row of distinctly pale tubercles around the eyes. It does not have prominent spines on the underside of the palpal femurs as seen in the similar Lacinius ephippiatus.

This species strongly resembles to Oligolophus hanseni but has three trident members with the central one being the longest, rather than the five or more tubercles of O. hanseni trident.

Habitat and ecology
Oligolophus tridens is found up to about 600m in Britain and to 1700m in the Alps (Martens 1978). It is predominantly a ground layer/field layer species often found in woodland but common across many habitats including wetlands and gardens. It is usually found in litter, grass tussocks and under stones and logs, and also climbs walls and can be found in trees and bushes by beating.

The eggs are laid in late summer and autumn, with juveniles present from April to September. Adults are generally found from July until late autumn/early winter.

The species is a nocturnal forager, which makes flexible use of its habitat to exploit prey availability. Juveniles usually feed in the ground layer and live and forage higher up as they mature, making use of whatever food resources are available. Oligolophus tridens is known to eat a very wide range of live and dead invertebrates including springtails, aphids, beetles, flies, woodlice, spiders and snails. They have also been recorded as feeding on plant material, vertebrate corpses and even bird droppings.

Adult Season Data (based on 464 records with adult season information)

Recorded substrate and hydrology for locations with Oligolophus tridens