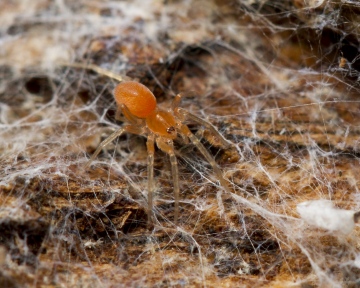 Distribution
The species is widely distributed in southern Britain as far north as Lancashire and Yorkshire, but with only two records in Scotland. It is widespread in western Europe but is not recorded from Austria or Scandinavia north of Denmark.

Habitat and ecology
It is almost confined to houses and other warm buildings but Ian Dawson has found it outside in March in the stiff leaves of a yucca. The small size and nocturnal habits of Oonops domesticus enables it to live almost unnoticed in houses. Being an active hunter with slow, positive movements, interspersed with short, fast dashes and pauses, it can be found on ceilings and walls after dark as it seeks a mate or prey. During the daytime it remains concealed in a silken cell. Batches of two eggs are laid and there are probably several such batches of pink eggs which are visible through the wall of the sac. Adults of both sexes are probably to be found at all times of the year.

Status
Synanthropic but scarce. The spider is probably under-recorded due to its small size and nocturnal habits.

Adult Season Data (based on 89 records with adult season information)

Recorded substrate and hydrology for locations with Oonops domesticus

In my kitchen in the daytime