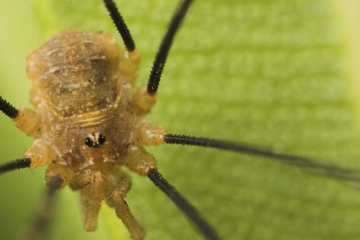 Distribution
So far this recently introduced species has spread rapidly and by 2017 had been recorded in 48 hectads. The first British record, in 1999, was from the Lea Valley (Thames tributary) (Hillyard 2000), since when it has spread rapidly across England and South Wales. In 2011 it was found at Brodie, in Moray (Scotland) (Davidson 2012) and has since spread eastwards. Presumably its range increase is largely a result of human activity within Britain, with possible additional inoculations from European sources.

The first European records of this species were from Italy (pre-1962) and it has since spread rapidly across western Europe. It is resumed to be a recent introduction to Europe but its origin is unknown.

Habitat and ecology Opilio canestrinii is found in the typical urban habitats and brown-field sites favoured by a number of recently introduced, long-legged species of harvestman. It is frequently found on buildings and walls, in gardens and parks and extending into semi-natural woodland.

Adults of both sexes have been recorded from July to November with some females persisting through December. There is some evidence of females overwintering and surviving until March in Britain. Wijnhoven (2009) notes adults persisting until February in mild winters in the Netherlands. Peak female activity is in September, presumably when they are egg laying.

So far, we know very little about the ecology of this species. Wijnhoven (2009) suggests that in the Netherlands O. canestrinii has been responsible for the rapid decline (if not extinction) of O. parietinus. There are now several recently introduced, large harvestmen occupying urban habitats. Their interactions and effects on other species would be worthy of study.

There appears to be little documented information on the feeding habits of O. canestrinii.

Adult Season Data (based on 145 records with adult season information)

Recorded substrate and hydrology for locations with Opilio canestrinii

Opilio canestrinii in my mum's garden