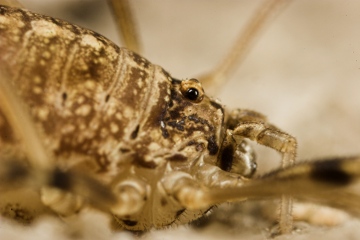 Distribution
O. Pickard-Cambridge (1890) was the first to record this species in Britain on the Isle of Portland. However, Roewer (1923) decided that saxatilis was a synonym of O. parietinus and it was not until about 1948 that O. saxatilis was again recognised as a separate species (Todd 1948; Sankey 1949). Opilio saxatilis is a species which is most common in south-east Britain but has increased its range in Scotland, presumably as a result of climate warming, where it is often found away from the coast.

According to Martens (1978) this is an eastern Mediterranean species that is now widespread across Europe.


Opilio saxatilis is a ground dwelling species of dry, open habitats particularly sand dunes, heathland, grassland, open woodland and gardens. It is found in the litter layer, grass tussocks, and under stones and urban debris. It has been found at altitudes up to 500m in Britain and up to 2650m in Greece (Martens 1978).

Adults are active from July to December but the phenology of the immature stages is less clearly defined as eggs laid in autumn hatching in spring. Recorded food items include aphids and Diptera.

More work is required on the ecology and phenology of this species.

Status
Widespread, increasing its range in the north.

Adult Season Data (based on 430 records with adult season information)

Recorded substrate and hydrology for locations with Opilio saxatilis